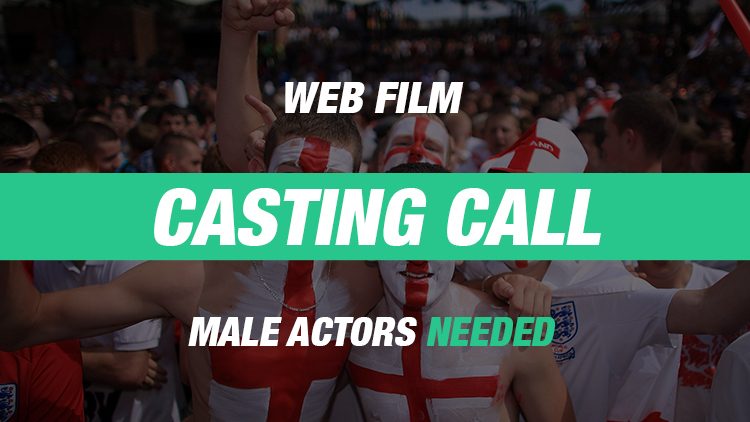 Older Males are required for a new web film and the details are below:

Synopsis: The film is a spoof called FFSENGLAND (For Fans Sobbing) and it’s based on England failing in Russia this summer which would leave many fans crying into their warm lager. However there’s a solution: take a DNA test and find your ‘second team’.

The film is focused on a single English fan who is watching a game, complete with England face paint. We hear the telly commentary say that England is out of the world cup. In tears, the fan puts his head in his hands … but when he finally lifts his head, he reveals a German Flag painted below. The fan is, in fact, half-German and he’s back in the cup with another chance!

Date of Casting: 29th May (Tomorrow)

Jimmy is a classic England Football fan … he’s so classic his photo is in the encyclopaedia. We need to feel his loss – that gut-wrenching heartache every English person has known for the last 51 years.

Think: The five stages of grieving in 30sec. It’s a familiar pain, so the performance has to be on point.

Casting will focus on the ability to depict the first four stages of loss in a short span of time in slow motion.

Hans is cliché of German with a touch of S&M Leather.

Ultimately, he’s random friend/stranger who sees’s another ‘Klinsmann’ in pain and extends an olive branch to help them up and get them back into the World Cup … with a chance. After all genetically the two men are practically brother’s from other mutter … thanks to the science of DNA. Nothing is spoken between them – the performance is entirely physical.

Casting will focus on the that simple physically expression of ‘friend’ from a random strange you’d never chat to.