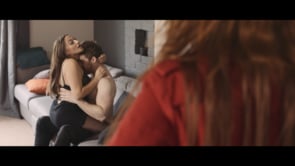 ‘Those of Us’ [Short Film] Trailer by Kieran Bourne

Many of us wouldn’t have known that Kieran Bourne has an interesting portfolio of short films, and he continues with the comedy, ‘Those of Us’, which stars the likes of Tiffany-Ellen Robinson, Richard Summers-Calvert
and Becca Hirani.

Things don’t really go as expected as an artist troops into her own shocking revelation of her own husband cheating on her with one of his students. Yes, it’s twisted and dramatic with the common shocker of founding-out, but it’s how she responds that actually commences the short film.

Watch for this film at film festivals.