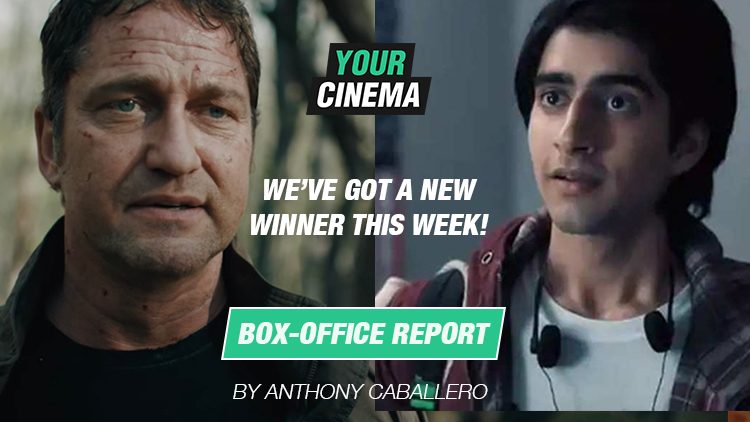 Your legs all right?

What about your back?

Carnival was a madness!! I mean… so I’ve heard, I’m well behaved so I wouldn’t know anything about that. What I do know is that the streets were filled with joy. This vibe found itself everywhere, to the afterparties, the BBQs and of course the cinemas!

From explosive sound systems on the streets to on-screen explosions in theatres, wherever you placed yourself during the weekend, action was everywhere! I’m going to delve into the newest releases this week and where they landed on our Top Ten:

Angel Has Fallen – and what an impact it’s made – 2 million off the bat!

Like many of the high-stake scenes during the movie, Angel Has Fallen grabbing #1 surprised me. The moment I heard about its release I didn’t see it topping Tarantino’s work anytime soon. “We’ve seen this movie’s plot way too many times”, I told my mum, “it’s an innocent fugitive on the run thriller”. I made the mistake of readring the synopsis and writing it off.

But I was wrong! There is a reason why this movie has dethroned Once Upon A Time in Hollywood! And that reason is the award-winning actor, Gerard Butler. That’s right, the actor responsible for booting his competition into second place is none other than the “this is sparta” screaming Scotsman himself.

Butler returns as Mike Banning, a secret service agent who saved the White House in 2013’s, Olympus Has Fallen. Protected queen and country in London Has Fallen. And now he’s back at it again, but this time he must rescue himself after being framed for the attempted assassination of the president. Showing in just over 500 cinemas, it’s a feat that Angel Has Fallen has dominated the top 3 amongst blockbusters that were showing in almost 700 cinemas. With some of its scenes shot in London, Angel Has Fallen is 121 minutes of action that really hits home.

Creeping in at fifth on our list is Scary Stories to Tell in the Dark. The movie is an adaptation of the horror anthology series written by Alvin Schwartz. If you were a fan of these books, then you’d know that the illustrations by Stephen Gammel made every turn of the page a chilling experience. So prepare to be frozen like your Tango ice-blast beacause Director André Øvredal builds tension with every beat.

Don’t let its title fool you, this next film sprinted to its position in our top ten. In 7th place, Crawl is the monster movie you wish you made. It instantly stood out to me, it’s not a remake, a sequel or a re-telling of a novel. Crawl is 100% original content! It’s a story with a simple premise: escape alligators whilst trapped in a flooding house during the chaos of a category 5 hurricane.  It got me thinking, could I do that? Could any of us do that? And the answer is no! But I’ll tell you who can… Hayley can.

Crawl couples the creativity of The Hills Have Eyes’ director Alexandre Aja with the brilliance of Sam Raimi as producer. English actress Kaya Scodelario battles with all things Floridian (storms and repltiles) in her outstanding performance as Hayley. The inclusion of alligators as the ‘monster’ made for the best 87 minutes of snappy action I’ve seen in a while.

As promised last week, it’s time to check back in on Good Boys vs. Dora and the Lost City of Gold. I was confident that these films would remain head-to-head. I have a feeling that each one will stay high on the leader board for some time. Let me just scroll back up to the league table to see how they’re doing…

Well, with that result I guess Good Boys will be saying its good-byes real soon.

As for me, I’ll be back next week! Stay tuned!