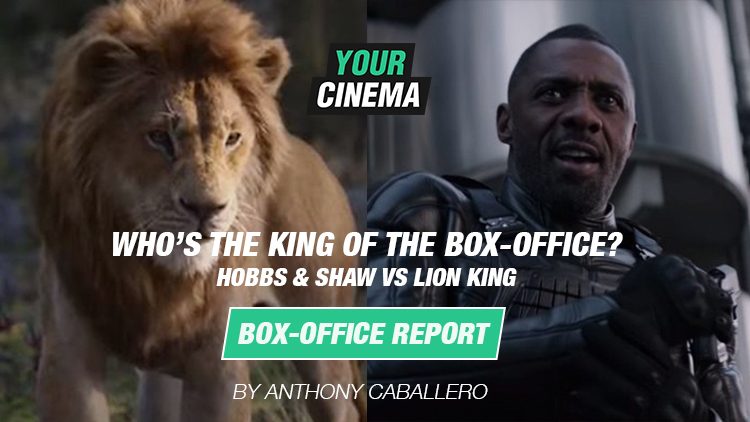 Welcome back people! I will address the lion in the room very soon, but first I want you to picture this:

It’s 2001… “My life will never be the same…” That’s Michael Jackson’s voice playing from a radio somewhere in the house. You’re feeling great and why wouldn’t you be, you’ve spent the day laughing at Michael slapping Jr’s head on My Wife & Kids. Uh oh, here comes your sibling wanting to watch Fairly OddParents. You hide the remote behind your back and promise to take them to see The Fast and The Furious instead.  They reluctantly nod and leave you alone.

Now,  I want you to hold your thoughts in the same year. You’re in the cinema now, the final race between Dom and Brian at the end of The Fast and the Furious is going down!!! They’re head-to-head! And Dom has just lost! He smacks into a van so close to the end.

SNAP. You’re back to 2019! A lot has changed, but some things have remained, the race for that #1 spot continues with two enormous blockbusters. It’s Fast & Furious vs. Fur & Ferocious and of course the King wears the crown:

Even if you’re not interested in cute animals singing (because you have a heart of stone) or you’ve been hibernating beneath Pride Rock during the week, I’m sure you’ve heard that The Lion King is the highest grossing animated movie of all time! This was originally a record held by the movie Frozen since 2013. Frozen 2 is scheduled for UK release in late November and will undeniably try to snatch that title back. The movie features a voice role from Emmy Award-winning actor Sterling K. Brown. You’ve seen him in Black Panther, This Is Us and may have recognised his voice in one of our top ten films this week.

Fast & Furious Presents: Hobbs and Shaw is second on our list (a.k.a. ‘Dom’ in the race to the top spot). The movie has pulled in a massive 12 million! I want to be surprised but we’ve all seen the cast. Dwayne Johnson! The man has over a hundred acting credits with six more announced and/or in pre-production. Jason Statham! This guy has over fifty-two years but still does stunts better than some of us can on the gram. Idris Elba! Need I say more, I’ve come to assume he broke out of character when he called himself “Black Superman”. Vanessa Kirby! You may know her from period dramas such as The Crown, but she’s gone from regal to ruthless. The movie is in its second week of release and may top the charts next week.

Yup, it’s Angry Birds, and that game now has a second movie that’s taking the world by storm! It’s an undeniable masterpiece that children are falling in love with. You’ll recognise the voices of Jason Sudeikis (We’re the Millers), Sterling K. Brown (as mentioned earlier), Tiffany Haddish (Girls Trip) and much more. Also, shout out to Peter Ackerman, the screenwriter who managed to create child-friendly content from such a violent premise.

Oh and on the topic of violence, Quentin Tarantino’s Once Upon a Time In Hollywood is without a doubt going to smash its way into the top ten next week… But will it be beaten by Dora and the Lost City of Gold? Before you call me loco, I’ll leave you with this, Dora has an early rating of 81%.