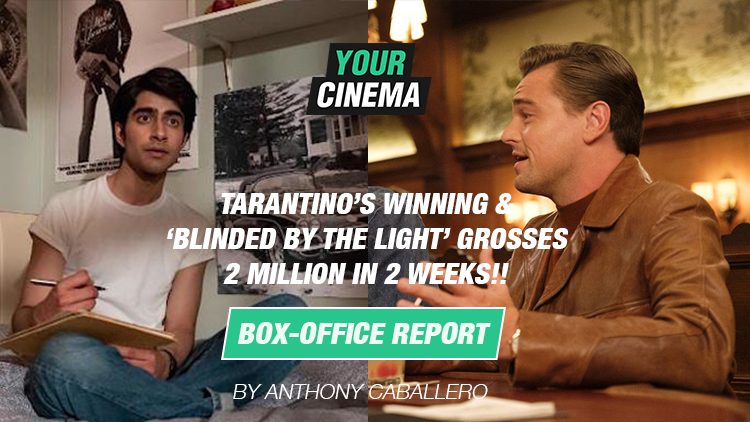 “Quentin Tarantino’s Once Upon a Time in Hollywood is without a doubt going to smash its way into the top ten next week… But will it be beaten by Dora and the Lost City of Gold? Before you call me loco, I’ll leave you with this, Dora has an early rating of 81%.”

It takes a certain type person to stand by their words and defend them even after knowing they’ve lost. Which is why I must let you know from now… I am not that type of person.

What on earth was I saying! No offence to The Explorer or anything but I’m ashamed with myself for even thinking Dora could pull a win out of her purple bag. Dora vs. Tarantino and it’s a W for Tarantino every time. I mean, Dora may have knives in this latest movie, but have you seen what Tarantino is working with. The guy has an arsenal of actors at his disposal. Leonardo DiCaprio, Brad Pitt, Margot Robbie, Al Pacino, and the list goes on. However, I’ll warn you from now that of you’re hoping to see Tim Roth make an appearance in this one, he doesn’t. Despite Tarantino filming a ‘funny little sequence’ with the British actor, it never made it into the final cut.

Once Upon a Time in Hollywood took money from our pockets with ease. And let’s face it, we knew it would. So far it has made 7 million in a single weekend. There is one moment that sums up the greatness of this film. It’s a line of dialogue in that touching scene between Rick Dalton (Dicaprio) and Trudi (Julia Butters). Dalton is an actor who is struggling to get where he wants in the film industry, but after a single take Trudi whispers to him, ‘that was the best acting I’ve ever seen in my whole life’. I believe this quote breaks the fourth wall; and is self-reflective of the performances of everyone who came together to make Tarantino’s 9th movie a success.

In our #2 spot is Lion King. At this point it’s just showing off. Like, okay Simba, we get it, you’ve made £65 million in just 5 weeks. Go buy yourself some new furs or take Nala out or something.

‘Blinded by the light’ is exactly how writer/director Gurinder Chadha should feel right now; she’s back in spotlight with another coming-of-age film. It’s hard to believe it’s nearly been 2 whole decades since Bend It Like Beckham. Over the years, Chadha has refined her storytelling skills, and it shows in Blinded by the Light. The film is inspired by the writings of Pakistani journalist, Sarfraz Manzoor and stars upcoming actor, Viveik Kalra as ‘Javed’. After taking a liking to the music of Bruce Springsteen, Javed’s story takes us on a journey through 1980’s England, race during that time and the pressures of a young boy’s wants conflicting with his families’.

Most weeks I like to select two movies and see how they compare with one another the following week. This time I’m choosing Good Boys and Dora & the Lost City of Gold. Both movies aim to entertain a younger audience but do so in their own interesting ways. Good Boys is the brainchild of comedian actor Seth Rogen. If you are familiar with Sausage Party and Superbad, then you already know that this movie challenges its Restricted R rating. Now that the teens have all seen Idris do his thing in Hobbs & Shaw, I’m certain this movie is next on their list.

Isabela Moner has appeared on TV in 100 Things to Do Before High School. Then as Izabella in Transformers, and now she’s entered high school as Dora. With a hand on my heart I can promise you that Moner smashes this role. The call backs to her cartoon predecessor are hilarious, making it a fantastic film for the young and the not-so-young. Having passed Toy Story in sales this week I wouldn’t be surprised if it overtakes Hobbs & Shaw soon. If Dora can find a lost city of gold, she can navigate her way into our Top 3. I’m certain the success of the screenplay had a lot to do with the contributions of British-American director, Nicholas Stroller. Stroller has worked on The Muppets and Storks, and really is the master at creating loving and light-hearted scenes.

As you’ve noticed, Spider-Man is hanging by a self-woven thread and is dangling as #9 on our list. Recent news that Tom Holland may never play the character again due to failed negotiations between Sony Pictures and Marvel Studios has disappointed fans across the globe. Do we have the patience for a new Spider-Man, and could we finally get a Miles Morales film in live action?

Let us know what you think. And as always, make your week a movie.