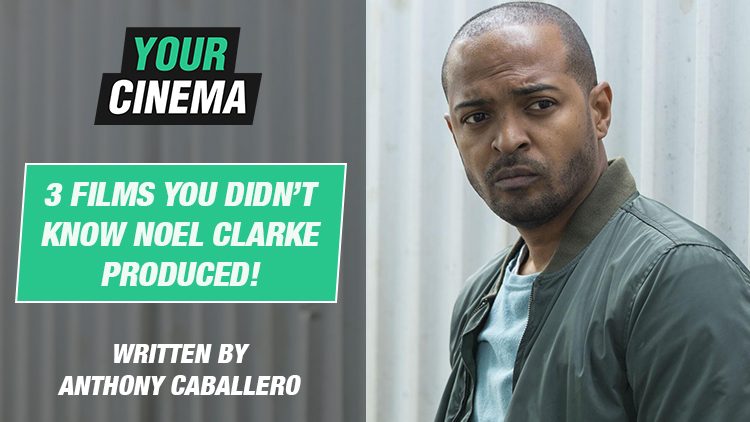 Noel Clarke isn’t just ‘that guy’ he is ‘That Guy!’

You get the difference, right?

Okay, here’s an example, imagine you’re watching a film with a friend and they point at the TV and say, “oh, him, what’s his name?”

Picture the same scenario but now your friend jumps up and shouts, “It’s him, it’s That guy!” You nod your head and say, “yup that’s Noel”. You’re not even surprised to see him in another feature, it’s expected, the man has taken hold of the industry and we praise him for it whether he’s Sam, Stuart or Stu.

In his field Clarke is an athlete that doesn’t stick to the lanes, he will gladly take on the position of director as he did for ‘Fast Girls’ or run with the role of screenwriter like he was for ‘The Anomaly’; and with 19 producer credits to his name, there’s no stopping this man. Here are just three films you didn’t realise Noel Clarke produced:

is a movie that will have you looking back over your shoulder when you next walk home. ‘10×10’ is a fast-paced abduction story with a twist. Starring the Dracula Untold actor, Luke Evans as ‘Lewis’.

Lewis carries himself as ‘that guy’, not really remarkable, unnoticed and uninteresting until that façade is torn down. He enacts a plan of revenge against the Spotlight Award winning actress Kelly Reilly who stars as ‘Cathy’.

10×10 is aptly named because both actors keep their performances 100 the whole time. Also, Cathy is kept in a soundproof room exactly that size.

You know Jemima Kirke from ‘Tiny Furniture’ and ‘The Little Hours’ but I want you to forget about those characters. It’s time you met Gillian.

Gillian is an aspiring playwright who’s married to ‘Oliver’ (Richard Elis), a DJ who barely scrapes together enough for a living. But that’s fine, Ollie is content with that. Gillian on the other hand is tired of the stagnancy. We are all determined to find our dream job and it’s what we do with that determination that defines us. Gillian decides to organize… a Shakespeare festival.

Getting thrown out of a club is embarrassing but being denied entry at the door – not even getting that chance to get hurled out like Jazzy Jeff – now that’s just insulting.

‘Legacy’ is a movie that you must watch, not just for the comedy, but for educational purposes Legacy comes with a lesson that teaches us to be bigger than our competition.

Franz Drameh (this is where you say, ‘That Guy!’) is ‘Sean’. When he and his friends are excluded from a party, one which they had psyched themselves up for, the five refuse to go home hanging their heads. Instead, they establish their very own London nightclub to upstage their rivals. Legacy is wonderful culmination of Noel’s knowledge of London youth and Franz’s raw talent.

And there you have it, whilst you wait for Clarke’s next cinematic appearance you can fill that time with three films you now know Noel Clarke produced, a list that I so desperately wanted to title ‘watch these now because you won’t regret it’.