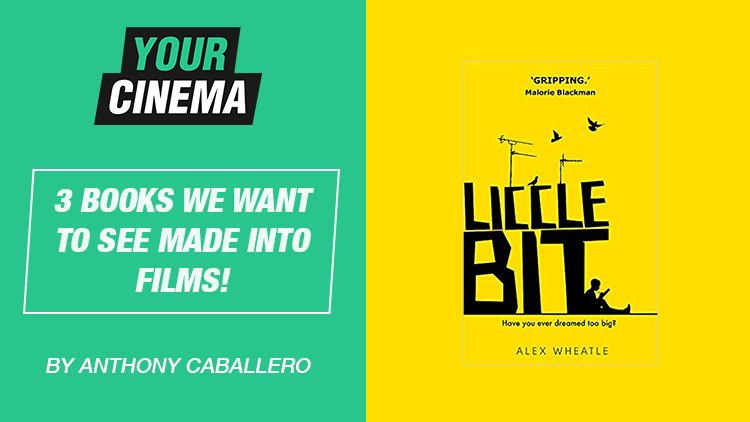 READ NOW: 3 childhood books we want to see made into films!

Noughts & Crosses is getting its own tv series!

I’ve been screaming that the entire book series needed to be a TV show for time!!

I’ve been a die-hard Malorie fan for years. I remember when she dropped a cinematic trailer for her fourth book ‘Double Cross’ in 2013. Do you know how gassed I got!? I saw the trailer and thought a movie had to be on its way. And here I am… still waiting [insert crying emoji here].

Now trust me, I could talk about the upcoming series all day. I could go on about the fact that no one is ready for the controversy that will literally hit home through people’s screens. But as the masterpiece is still in pre-production I’m going to leave all that talk for another time. However, whilst being caught up in all the buzz to do with the upcoming show, this exact stream of thought played out in my mind:

Man, Malorie finally got her series. That’s dope. My childhood is really being revived right now! They should just make everything into live-action, Recess, Teletubbies, Dora – no wait, they did that. Well, other books then…yh, they should totally make other UK books into movies!!!

So here we are! Three UK books that should be made into movies:

Yup, if Noughts & Crosses is getting time to shine then this book deserves it too. This piece of page-turning perfection right here is hands down one of the best teen-spy series out there. Yes, I said series, there is so much movie-making material here I can’t believe it hasn’t been done!

Cherub is essentially a boarding school for children from the ages of 10-17. The children who join Cherub are usually orphaned. They train vigorously and are sent on missions to bring down criminal organisations. The reason this works so well is that they are kids! Who is going to believe that the new boy who just joined the school is actually a spy? The entire series will have you on the edge of your seat, so imagine what a movie would do! (You’d be on the floor).

The main character, James Adams is unlike no other, at this point, I feel like I know him personally. He’s gritty, real and hilarious. Having read the series from year 7 onwards I basically grew up with James and his friends. It’s this feeling that a younger generation should to have in their lives.

So far Robert Muchamore has sold over 15 million books. That figure alone speaks for itself, so when this does become a feature film, someone let Robert know that I want to be in it!

Recommended by Malorie Blackman, Little Bit is a story that needs to be made into a movie for the purpose of informing the younger generation about the importance of pursuing a dream and not getting distracted even when times seem hard.

Lamar is the protagonist of this book. Although he is more commonly referred to as ‘Liccle Bit’ due to his small stature. Despite his size, the boy has a big heart which seems to only have room for one person – Venetia King – the pengest girl in the school.

Living in South Crongton Estate isn’t easy. Liccle bit shares a home with his mother, Grandma, sister and sister’s baby. With his mum always working but still unable to pay for luxuries that other kids have, Liccle Bit begins to feel that he can only attain these things on his own. Venetia pays him some attention but he’d really like her to truly notice him, maybe the latest phone might grab her attention? Fortunately, Liccle Bit is an astounding artist, perhaps he could capitalise off of that skill to get him noticed more? Or maybe he should accept the tempting offer of Manjaro, a notorious gang leader who wants him to join his crew?

Liccle Bit is a coming of age story which shines a light on many of the topics that Top Boy’s release had last month. However Liccle Bit would be an important movie for the younger generation as it emphasises the importance of family, friends and remaining focused on your goals.

Written by one of my all-time favourites, if this book isn’t a movie within the next five years I’m going to make it myself!

Just like the book, Refugee Boy will be a movie that depicts life in Britain through the eyes of a fourteen-year-old boy named Alem, who was abandoned by his father in London to save him from being killed in Africa. Alem’s mother is from Eritrea, his father from Ethiopia, so when the two sides break out into conflict he becomes a child that seems to have no place he can call home.

With today’s current climate this story would do well on the big screen. Even with our world being more connected than ever, there can often be a disconnect which makes it hard for us to empathise with people we see on the news. It’s almost desensitising. This novel breaks down that wall and Zephaniah’s writing makes us experience Alem’s pain, sorrow, and happiness with each page. A movie adaptation would be a wonderful and fulfilling experience.

Already familiar with these authors? Have you read these books? What novels do you think would make exceptional movies, and for the ones I’ve chosen, which UK actors could you see playing the roles?

Let’s have a conversation about it! Feel free to drop your comments on our Twitter and Insta accounts.