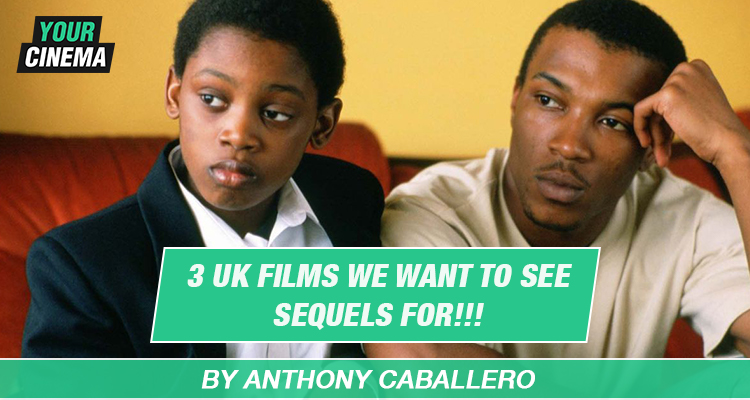 READ NOW: 3 UK films we want to see a sequel for!!! By Anthony Caballero @araycaballero

I recently wrote an article about movies that you might not have known were shot in the UK. The article included big blockbusters such as Star Wars, Inception, and other well-received films. Whilst writing the article I got thinking about UK films in general, stand-alone movies that were exceptional when they dropped… and then it hit me… why don’t these films have a sequel?! I have selected just 3 that I believe deserve to have an additional movie.

Before he was Dushane in Top Boy, Ashley Walters played the role of Ricky in one of the most harrowing depictions of how wrong affiliations can affect your life. The film takes us through the consequences of his every action but more importantly, the consequences he faced through the actions of his friends. Similar to Blue Story and Top Boy, Bullet Boy shows the impact violence has on the next generation, and it does so in a way that still shocks us to this day!

What could a follow-up movie contain? Ricky’s brother Curtis seemed to not want to follow in his older brother’s footsteps but what if we see a change in this attitude? With the film’s climactic conclusion, Bullet Boy has all the ingredients for a powerful sequel!

As if on cue, from the producers of Shaun of the Dead, I present to you an outstanding piece of action-fuelled comedy. Attack the Block was a success because of its authenticity. Many of the funniest moments in the film were drawn from the real experiences of writer/director, Joe Cornish. Joe had come up with the story for Attack the Block shortly after being robbed by a group of boys – he gives new meaning to ‘looking on the bright side’ of a bad situation. The reason this needs a sequel is for the community feel the production had both in its themes and practices. Acting roles for this film were sourced from local schools and youth centres. John Boyega found out about the film through an online advertisement! Even the dialogue was genuine, Joe would interview various children and ask them what they would do if aliens attacked their estate, their responses made it into the film!

And now, an honourable mention:

In one of my previous articles titled ‘3 Childhood Books We Want To See Made Into Films‘, I desperately wanted to include this movie right here. The only reason I didn’t – it had already been made into a film. So here I am giving the movie a new home in this article.

Stormbreaker has been selling me dreams since it first came out in 2016. I had thought that this was the start of something miraculous, that maybe there would be a whole cascade of movies coming after the success of the best-selling book series it was based on. I was wrong. If you’ve read the series then you already know that if they had followed the complete journey of Alex Rider it would’ve made Kingsman look like a joke. Fortunately, a TV series adaptation has been made and is set to come out soon!