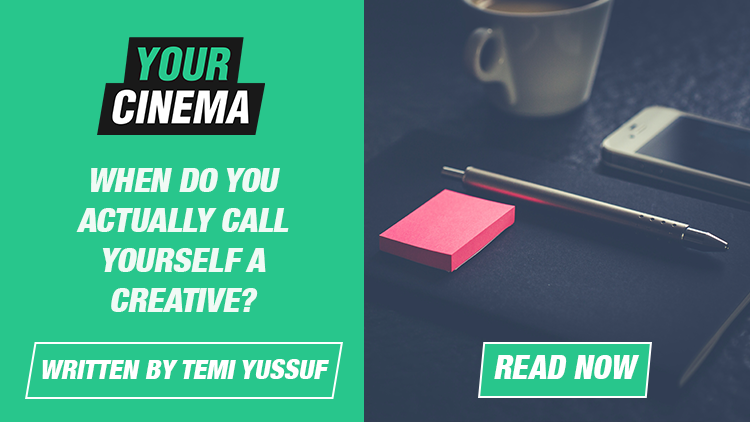 When do you actually call yourself a creative? ‘The identity crisis’ by @temedaio_ | READ NOW

Identity is one of those ambiguous and sensitive trigger words, that mean too many different things (it’s all subjective), and one of the biggest battles I have come to realise creatives face, is understanding and knowing our identity.

As creatives, we are often put on trial to perform to our roles excellently and there’s usually very little space to be anything in between mediocre, but with art and creativity being so subjective, who is qualifying us to be a ‘filmmaker’ or an ‘artist’? Is it us the creative? Them the audience? The ‘gate keepers’? or Who?

What is this identity crisis?

Unlike most career paths that require professional studying or a qualification, a career in the creative field is built off of so many other different factors. Some people do start their career by studying their craft in a professional setting, but others can be self-taught or gain direct experience from the industry. It’s fair to say talent and ability aren’t the only things to carry a creative career into success – the marketing of your work (or you as the creative), your network and your audience all contribute to how ‘successful’ a career can be. However there’s no right or wrong way, as many have built successful careers through all those routes, but there is still the question “when are we qualified to call ourselves a creative?”.

As a writer/ filmmaker, I can put my hand up saying I struggle with my identify as a creative. I often question if I really am a writer – do I become a writer after I write one piece of work? Is it after the twenty fifth piece? Is my identity as a writer measured by how many people like my work? Is it measured by success? (even that’s subjective) – These are the questions I battle with as I try to confirm or deny my identity. I didn’t study or professionally train in creative writing, yet I have the same abilities to write this article. So, am I just someone who has written something, or does that make me a writer? And if so, at what point did I officially become one?

Every form of art is subjective, ultimately, art is made to be seen, books are written to be read, and films are created to be watched etc. The common theme in all of this, is that people are meant to be engaging with your piece of work. The opinions of others seem to hold some value in the grand scheme of things, it’s easy to just label yourself a director or a producer, but if consumers don’t see anything you do, can you still call yourself that? You are who you say you are, but if you aren’t preforming to the duties of what you say you are, then can you really say you are who you think you are?

It sounds confusing, but in some way, it’s quite straightforward – can you call yourself an actor if you don’t act? It’s easy for anyone to label themselves as anything, to the point a certain standard or quality can be lost, otherwise that would mean anyone with access to a phone can call themselves a director. It obviously takes a certain level of skills to actually be a creative (you actually have to be able to create something) it’s fair to say there’s evidence required to prove what exactly you’re able to do, doctors do it every day when their saving lives (a good one anyway). It’s important for creatives to build their catalogue of work as well, despite being good or bad at what you do, if you do it, then surely it means you are it.

When there are so many different ways to build your career, it’s so easy to be confused by whether or not you’re doing the right thing and if you’re at the level you need to be, to be able to form your identity.

With all this being said, there is no one qualifying agent that grants us as creatives the confirmation of our titles, it seems as though all factors matter – Your work, your network and your audience. However, the work begins with you, so YOU have to qualify yourselves as a ‘writer, director or actor’, before anyone can qualify you as such.