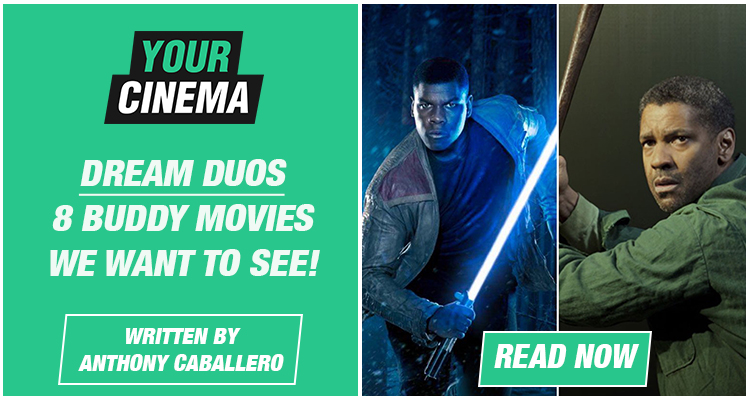 Dream Duos: 8 buddy movies we need to see! By @araycaballero

I’m not going to lie, the first few drafts of this article were boring! I was going to pair up our best actors, type some spiel about why they would be great together and call it a day. But I know you know about these actors, so where is the fun in that!!? Where’s the creativity?

So here is how this is going to play out: I’ve selected my eight Dream Duos; for each pair, I’ve created a potential plot, one I think these actors would actually find themselves in. Your role is to see which faux storylines are the strongest, which are the most believable, and which ones you would want to watch.

I plan to have fun with this so without further ado, here are my 8 Dream Duos:

Synopsis: When an American bodyguard (Anthony Mackie) is sent to London to accompany the president on a diplomatic meeting with the Prime Minister, the last thing he expected was that he’d have to team up with UK officer (Ashley Walters) to protect their leaders from insurgents. Can the men work together despite their egos and completely different approaches to violence?

Bad Logline: Like a Jason Bourne Movie, but with two Bournes!

Synopsis: When Agent 2 (Idris Elba) is instructed to take out an easy target (Daniel Craig), he’s told it will be a simple job. As a result, he goes in ill-prepared and is lucky to escape with his life. He later learns that the “easy target”, is no other than Agent 1, a predecessor who defected from the Secret Service unit. Agent 2 eventually captures Agent 1, but can he bring himself to complete the mission when he discovers why Agent 1 went rogue?

Bad Logline: Exactly what you’d expect from a collab between these two.

Synopsis: After a devastating experience that puts an instant end to a 5-year relationship, an American lady (Issa Rae) decides she needs distance and starts a new life in the UK. Her housemate (Dominique Moore) is determined to give her the full London experience, but she isn’t exactly the most reliable tour guide.

Title: In Her Image

Bad Logline: If Freaky Friday had a child with Back To The Future.

Synopsis: Aaliyah (Antonia Thomas) couldn’t dislike her mother (Thandie Newton) any more if she tried (and believe me she has)! However, her mother always has one rule: they must settle any dispute before they go to bed. Thinking this is ridiculous, Aaliyah goes to sleep one night angry with her mother, only to wake up the next morning in her mother’s body… back in the mid-’80s. Will this experience help her mend the relationship with her mum and more importantly, how will she get back to the present day?

Bad Logline: Like Kick Ass but they’re not trying to be the heroes.

Synopsis: Tired of being bullied, and only seen as ‘innocent guys’, best friends Callum (Tom Holland) and Elliot (Taron Egerton) decide to alter their personas. They begin by committing small crimes in an attempt to ‘toughen them up’ but soon find themselves in way over their heads. Before very long, Callum wants to resume his old life but Elliot might just be too far gone to do that.

Title: Cut From a Different Cloth

Bad Logline: Inspired by Self Made but about clothing instead of hair.

Synopsis: The pioneers of two ever-growing fashion brands have been rivals for years. However, a third company has emerged and is starting to steal the spotlight and their ideas! Can the two pioneers (Masali Baduza & Lupita Nyong’o) squash their beef and bring their companies together to unite against this common foe? Or are their personalities to big for peaceful coexistence?

Bad Logline: A pinch of Green Book and a sprinkle of The Upside.

Synopsis: A chauffeur (Daniel Kaluuya) is employed to drive a renowned American businessman, Mr Daniels (Samuel Jackson) during his short stay in London. At first, the Chauffeur despises the arrogance of the businessman and leaks his private information to any interested buyers. This backfires sometime later once they have formed a friendship. Mr Daniel’s life is in danger and the Chauffeur has to protect him.

Synopsis: A bounty hunter (Denzel Washington) finds an orphan (John Boyega) and teaches him everything he knows. When he’s old enough, the Orphan is instructed by the Bounty Hunter to ‘take out’ various people. The Orphan is later shocked to discover the people he eliminated had been the family he had never known. Realising this had been the Bounty Hunter’s plan all along, the Orphan won’t rest until he gets revenge!

And that’s all eight! Could you imagine the actors being cast in these roles? Think you could do better? I’d like to see you try!!