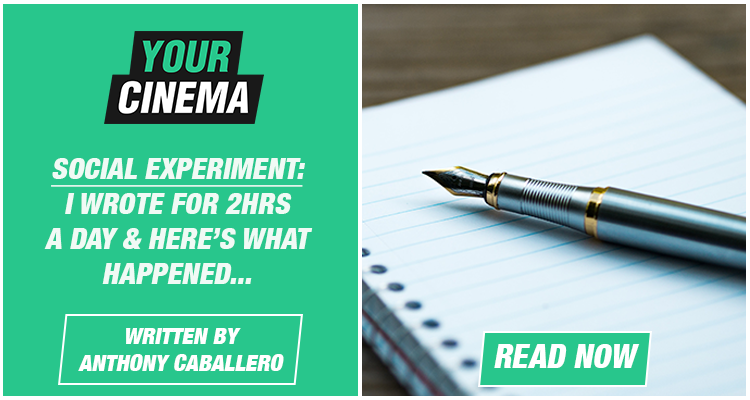 Social experiment: I wrote for two hours a day and this is what happened… | By Anthony Caballero @araycaballero

You were probably made aware in a previous article (how often should a writer write?) that I am fascinated by the writing process! I have decided to explore different writing techniques to see which ones suit me best.

In a video by Film Courage titled ‘how does a professional screenwriter approach the craft’. Scott Myers suggests writing for 2 hours a day… every day. So that’s exactly what I did (but only for a week).

My dreams are very vivid. On a level, sometimes they’re like movies, complete with a hilarious cast, a gripping plot, and thrilling set-pieces. You know what I hate about having such lit dreams? Being woken up from them! It’s 7:00 AM, I’m half-asleep and something on the horizon of consciousness is yelling at me. Oh right, it’s my alarm. I had instructed that thing a few hours ago to detonate at this time. Well, BOOM, I’m awake! It takes a few seconds for my brain to remind me why I’m doing this. Why am I up so early? That’s when my thoughts from the night before return to me like a good throw of a boomerang – it’s time to write – great!

It’s not that I don’t want to write right now. But I didn’t exactly go to bed at a decent time. But I know that if I don’t parallel park my butt at my desk chair in the next few moments, I’ll most likely fall asleep again – challenged failed on day 1? That could never be me!

I’m working on a treatment/script for a pilot. My task for the week is to see how far I get with it. At the moment I’m kind of debating where I should start. Should I take this time to baby-feed words to my screenplay or should I build on the story idea first? After thirty minutes of internal deliberating, I’ve finally decided that for now, I’ll give my attention to the treatment.

It’s been two hours and that was… well, it was definitely an experience. I know Temi says writer’s block doesn’t exist, but boii, there was definitely a dam obstructing the flow of my creative river today! I think I need a plan: I tell myself that tomorrow my goal is to complete the story outline for the pilot and we’ll go from there.

BOOM – that’s my alarm again. I’m ready for it this time though!

One thing you should know about me: I’m solar powered. The more sun = The larger my creative output. At times this is a superpower, if you catch me during a heatwave I’m a solar panel converting sunrays into sentences. On the flip side, I’m demotivated on days when the sky looks like somebody put the grey lid over the dutchie pot. Fortunately for me, today is a bright day!

Writing is a lot easier this morning. I’m applying tip #2 from my unique ways to stay creative article; there’s something about the sound of rolling waves that really puts me in my writer’s mindset! The two hours are up and I’m looking at a completed story outline, approximately two pages in length – not bad, Anthony, not bad.

That’s strange. I’m awake but not due to any obtrusive ear-blaring this morning. I’m hit with a sudden rush of panic. I forgot to set my alarm! I’ve failed!! I must’ve overslept. Two days, that’s all I can manage? I’m useless! How can I write an article on that?

I check my phone. 6:53 AM. Oh. I just woke up too soon. I can’t help but smile – that’s a first. I see no point staying in bed now, there’s too much adrenaline in my system after that little scare anyway (who needs coffee).

At the desk, it’s like I have a second nervous system as my brain fires out ideas quicker than electrical impulses. I’m unstoppable! I don’t know how to explain it but today is just one of those days. I type, completely mesmerised by the dramatic opening of my screenplay, it’s crazy!! My alarm goes off and stops me mid-sentence. I don’t know how to feel, the day is still young and I have so much more to write! But rules are rules – just two hours a day.

If you’re wondering why I chose to do this challenge from around 7:00 to 9:00, it’s because I know this is the time that works best for me as a writer. Any later and I’ll get too distracted, too hungry, or too busy. Procrastination is my biggest weakness and I know if I don’t start writing before people start sending me memes time will slip by.

It’s an overcast morning, so you know what that means. As I write, I notice I don’t have the same brilliance I had the day before. A part of me regrets stopping so abruptly yesterday, tell Temi that writer’s block does exist – but only when we stop ourselves when we’re on a role. Talking about ‘role’, that reminds me – I play the sounds of ‘rolling beach waves’ and continue. With an hour left to go, I finally start to find my stride again.

I don’t know how it happened, but two hours have sped by and now I’m looking at the opening 10 pages of a pilot. Admittedly, the idea for the opening had been scribbled in note-form before I started this challenge, but now they inhabit a single body of neat 12-point Courier font.

You may be thinking “only ten pages”, but I’m going to racket that ball back with “quality over quantity”. I’m proud of the way the scene I’ve created establishes the tone of the entire pilot. And that was just in five days!

I wondered if I should continue this practice over the weekend but in the video I sampled this idea from it compares writing in this way to a Monday to Friday job. I decided to use the time to send the completed opening to writers, actors and other friends. This is some of the feedback they gave:

So in conclusion, this experiment has proven to be very useful to me. It had its highs and lows but for the majority of the time, it felt like a good way to get into a disciplined routine. I wonder how realistic it would be if I didn’t have as much time on my hands due to this lockdown.

Big s/o to the wonderful people who read my opening! I’ll see you at the next challenge!