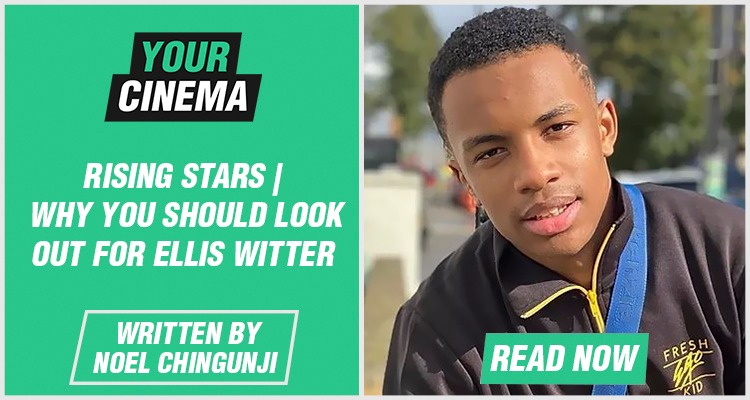 The essence of Your Cinema is to put a spotlight on our talent. Both established and those we believe have “got next”. Rising Stars is our new series which focuses on the latter category.

One talented individual that surely fits the bill is Ellis Witter! Ellis Witter is a talented actor that has been putting in work in the industry since 2013. Appearing in various commercials for iconic brands such as McDonalds, as well as staples of UK television including, East Enders and Holby City. Other early credits include: BBC’s Rev (2013). BBC 1’s  Silent Witness (2014) and Sky 1’s You, Me and The Apocalypse. After grinding consistently for 5 years Ellis finally gained his breakthrough after starring in the autobiographical short film, Amani.

The Richard Kattah helmed short film, depicts the powerful and heart-wrenching tale of Amani Simpson. A troubled youth who manages to escape the trappings of inner-city London but not before surviving a brutal stabbing. Today Amani is a rising leader in his community and uses his platform to steer young Black men from repeating the same mistakes of his adolescence. Witter played a younger version of the titular role (with producer Jovan Wade playing the older version). His nuanced performance was the perfect foundation for Jovan to add on for his take on the older Amani.

The short film was a viral success and has gone on to amass over 2.7 million views on YouTube. Certifying Witter’s position as a rising star to take note of. Since then the rising talent has stayed busy by starring in SICK. A short film tackling mental health and securing his first named character TV role, playing Eddie in Reggie Yates’ new BBC drama, Make Me Famous.

Ellis Witter has shown no signs of slowing down and it’s surely a safe bet that he will go on to become another Black Brit doing bits in the film & television industry. We are more than excited to see what he does next.